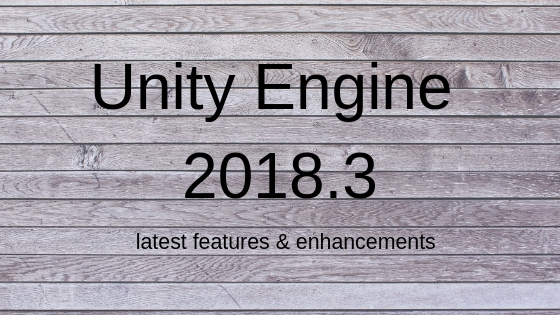 As a game development engine, Unity has earned its popularity with best in class features and  robustness. Since its evolution, Unity Engine has been improving itself to meet up to the expectations of its users. Recently, Unity launched it’s 3 versions for the year 2018 as Unity 2018.1, Unity 2018.2 and the just arrived Unity 2018.3.

Among all these, the latest version Unity 2018.3 is the most appreciated and liked. Moreover, both the game developers as well as a game development company now has Unity as its strongest pillar with introduction of many new and robust features. Let’s take a look at these and understand them better.

2. TextMesh Pro –  This feature allows you to bring together both the static as well as dynamic font assets in the same project. This is called the Hybrid Dynamic Font System.

3. Terrain System – With new asset types and well equipped tools, the terrain system now supports both LWRP and HDRP. while equally supporting backward compatibility in accordance to built in render pipeline and the existing Terrain System for Unity Engine. Some of the latest terrain system features include:

4. Lightweight Render Pipeline(Preview): Physically Based Light Attenuation, Custom Renderer, and Custom Render Pass Injection have been added to this version of Unity as a preview  and shall come fully loaded in Unity 2019 version.

5. High Definition Render Pipeline (Preview): This feature in latest Unity version is all set to give High end visuals and games.

6. Visual Effect Graph(Preview): Available as a preview, the Visual Effect Graph lets you create millions of particles on GPU without any constraint on the performance. The Visual effects Graph is currently supporting HDRP and will sometime later support LDRP too. This is a flexible node-based system, based on leading tools for VFX  used in making of the films.

7. Improvements in Lighting: With introduction of Configurable Falloff for punctual lights, the baked lights will now offer real like lighting features and improve the overall quality of the view. Also, with Light Probe Deringing, you can implement Light probe to windowing and use Disc Area lights for realistic looking architectural views.

8. GPU Progressive LightMapper: As a preview in this version, the GPU Progressive LightMapper has some limited set features including pure path-tracing-based algorithm on top of Radeon Rays and OpenCL for baking lightmaps in Unity, to bring some performance improvements that are above 10x the CPU version. The LINUX and MacOs support for the same is expected to come in Unity 2019.1.

10. Memory Profiler: The biggest flaw with previous unity releases was related to memory management, especially with low memory devices like mobiles. The good news is that the latest Unity 2018.3 version has overcome all these issues and gives you the power to check all the memory allocations yourself and overcome the memory issues in your project with C# and C++. So, the memory optimization power to you!

12. Particle System: Particle System in Unity 2018.3 comes with the maximum improvements and advancements than any other feature. It claims an overall 10% to 20% of improvement in performance with the following features embedded:

14. PhysX 3.4: Compared to the previous 3.3, this 3.4 version doubles the speed of aycasting, shape sweeping and mesh cooking. It also helps in faster detection of collisions in the rotating objects.

15. .NET 4.x Equivalent scripting runtime is now set as the default option for all the new Unity projects.

16. Manage Garbage Collection Control at runtime by disabling it, if not required.

Unity 2018.3 seems to be a great advancement by Unity in helping the future projects become more refined and user friendly. Since years, Unity is continuously brainstorming to bring out the most advanced and attractive features that keep the code optimized and give developers the power to create masterpieces.